A very pleasant ride out this morning taking Bella further afield. For a three year old she is very sensible, taking her attitude to life from her quasi-parents/ boyfriend (it's a mixed up relationship) and strolling along very calmly. I'm finding a shorter lead rein easier as I'm not then worrying about it getting caught around my feet or hands and I know that if she got loose she would come with us anyway. She's a pleasure to have along and hopefully she is learning some ridden skills without being ridden such as halting to an outbreath and the word 'and'. 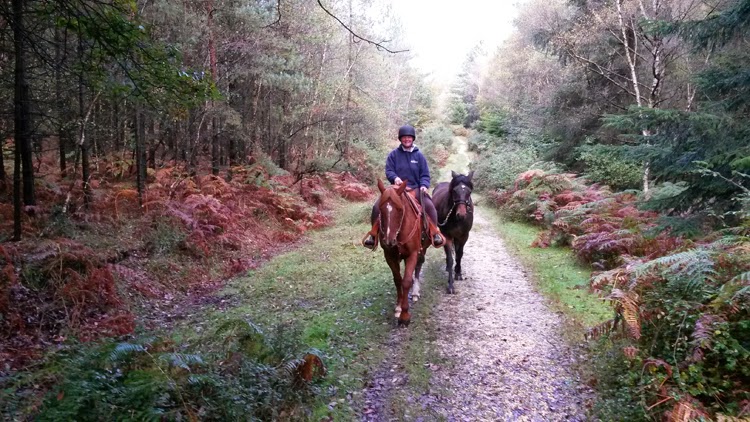 I took advantage of the cheaper prices for rugs in France and brought home two medium weights for Theoden and Petra. These two are only clipped and rugged for my own convenience during the winter months so that I don't have to spend half a day getting them clean and dry enough to ride. Otherwise I don't think they would need them at all. Why they make rugs in any colour but 'mud' I really don't know.

Another visit to Lenki this afternoon. His last appointment had to be postponed because of the weather so it was good to be back on track today. His owner has been loading him without panels during practice sessions which is all good news. Today we spent time just chilling in the box  (especially as it began to rain again!) offering him the occasional treat and giving him a lovely rub to help him to really relax and enjoy being in there. He's started to give up his place at the ramp and is prepared to stand more centrally and with his head over the back partition. This is another big improvement. We've also got the central partition in place but will need to work on closing it as he is fearful of being enclosed. You'll note there is a tennis ball placed over the end of the partition to reduce the risk of Lenki hurting himself if he presses against it.

After this we took him down to the school to work on his underlying nervousness. As predicted he wasn't at all sure about being touched by a foreign object such as a feather dusters and at first he circled out of the way. Rather than offering to stop he got faster for a little while as if he thought he was being lunged. It took a a moment to get him out of automatic pilot and once he stopped I took the feather duster away. There was a real penny dropping moment after which he accepted me touching him with it all over his left hand side.


When it came to the right hand side, he wasn't sure that was a good idea either and blocked me with his head. I've found that in these situations it helps to just 'pop next door' into the right hand vision and then back again to prove that you have no intention to harm them. This worked like magic and Lenki then allowed me into his right hand side, accepted the feather duster all over and indeed engaged with it all the way. When I picked up the plastic bags on a stick he clearly felt this was all old hat by now and accepted it immediately.

We finished the session with the umbrella and like a lot of shy horses he really enjoyed bossing something around. It's a really great way of building up a horse's courage. 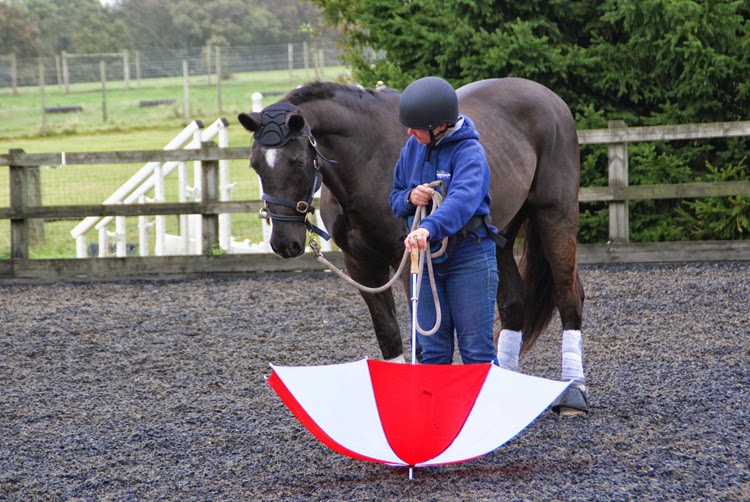 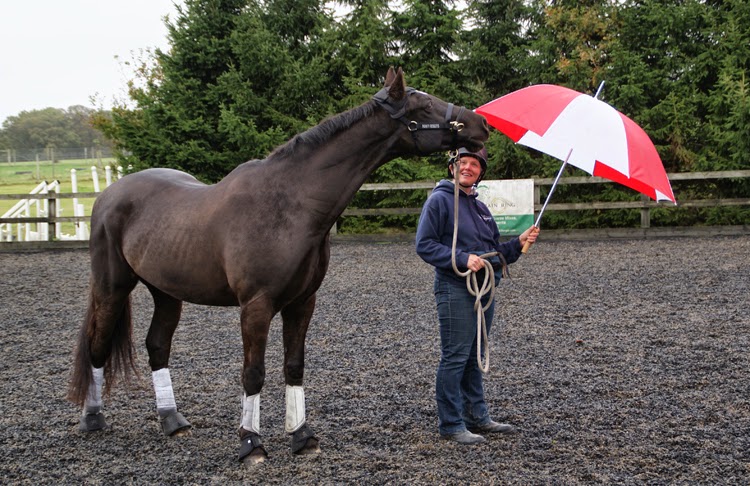