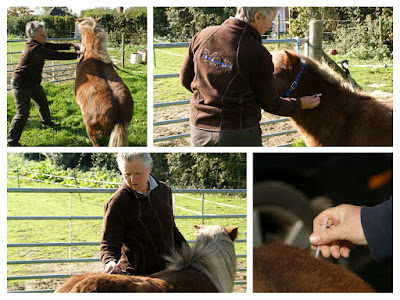 Five year old Shetland pony Bob came from the RSPCA and has an aversion to vets and needles. Poor vets they can't really help reinforcing these fears whenever they turn up to do something uncomfortable but there is a lot an owner can do to prepare a pony for injections. Using a needle-less syringe I taught Bob to accept the presence of a syringe and it being pushed against his skin. 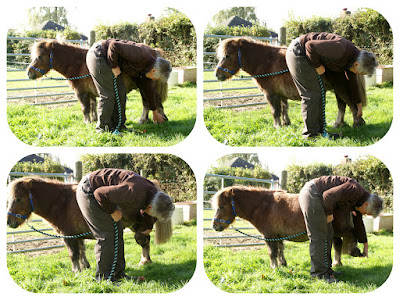 He's not too bad with his feet with his owner and he also tolerates the farrier. Strangers are not normally allowed to pick his feet up. By using a logical and methodical approach we can help him to relax about having his feet picked up. 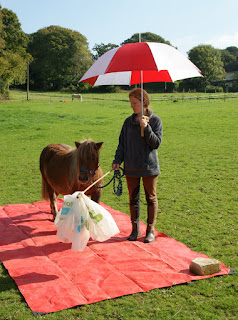 In the long term his owner hopes that he will be able to be ridden by small children. He needs to become a lot more confident first. He excelled himself at this first session accepting being touched by the feather duster and then the carrier bag, and not being worried at all about the umbrella or the tarpaulin. Like a lot of ponies he is not concerned about things, but he is concerned about people with things.

"It was great to meet you too, I feel a lot more confident after our session both about Bob's potential and my own ability ... having you reinforce that I was doing something correctly and highlighting without judgement when I was not was good for me." EB