Today wasn't my most glamorous day at work given that I was soaked by half past nine and had to wear my least flattering coat. I was working with a highly sensitive Welsh Section A colt who wasn't going to cope with a shushy mac.

Victor was happy to engage in the open field providing it didn't involve any sort of headcollar or touch that he didn't quite fancy. Offered food he was conflicted between being avid about the food and ambivalent about the touch that came with it - as a result he thought he might bite. Without food he was just going to wander off when he felt like it. 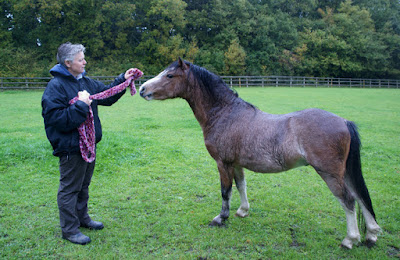 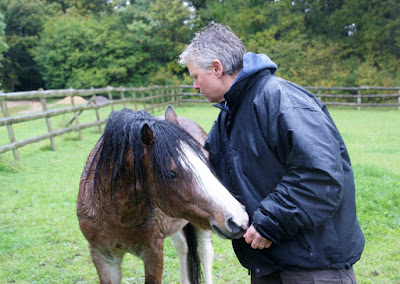 Now inside the panels I was able to start touching him with the feather duster, covered in a small piece of towel,  and then rub him with another piece of  towel. I could then prove that I was useful and that touch could be enjoyable. 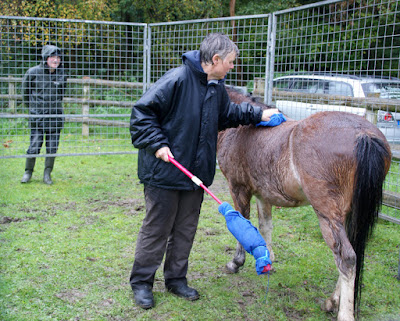 The scarf, damp as it was, came next, and I used it to desensitise his face and then to teach him to lead. 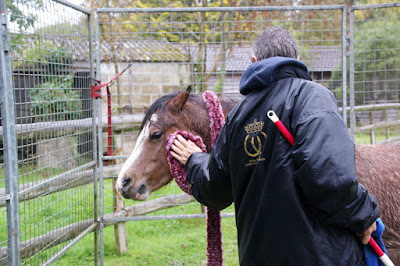 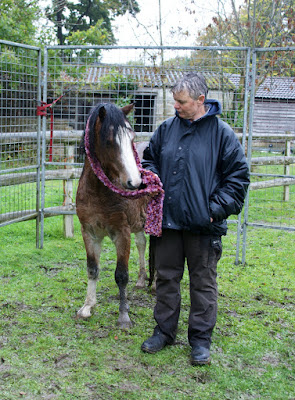 It proved to be a good mock headcollar. Although Victor has worn a headcollar before but he got it off after two days and then he wasn't willing to have it back on again. Putting a headcollar on, and leaving it on, does not train a pony to accept being caught. 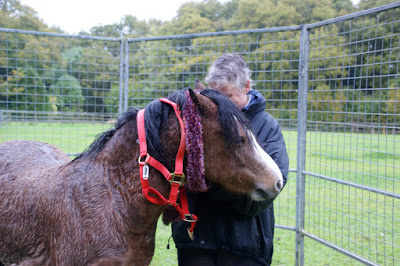 The headcollar went on very easily and was then taken off again three times. After that I let him out again and I will return in the morning. 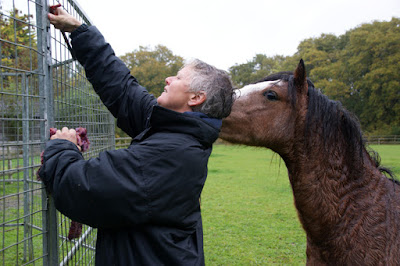 He seemed keen to stick around after the session...

Victor is looking for a new home and can be gelded before he goes or at his new home. If you would be interested in a perky, well bred, Welsh Section A, who will be quick to learn, then please contact me and I can put you in touch with his owner. More details of his breeding tomorrow.

Fifteen year old Arabian, Pinky, was not so keen to stick around. Since he was young he has rushed in and out of doorways and will not go into the field shelter without a human with him. Even then he blasts back out again when led.  He thinks that the doorway 'bites'. This becomes a self-fulfilling prophecy since when he comes to the end of the line his bottom turns and he can sometimes catch himself on the central section of wall.

I thought it might be worth trying clicker training to see if I could interrupt that pattern of behaviour. Posh bred and posh brains he soon cottoned on to how clicker works. 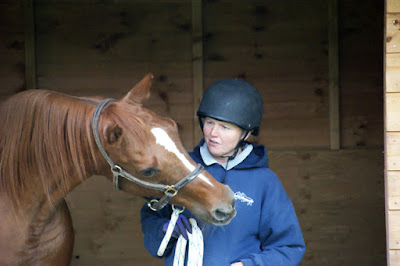 He was certainly going a lot more slowly although clearly still wary. 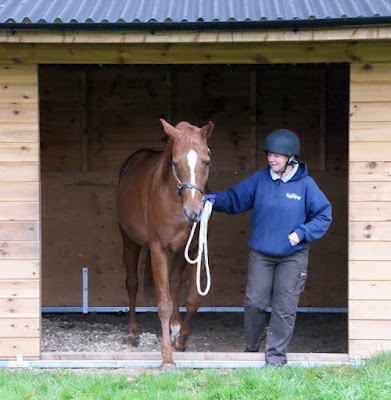 "Just had to tell you … this morning when I turned out, Pinks went straight over to the shelter and sniffed all around where you were yesterday , he then proceeded to go in! I could not believe it. I put a bit of hay in and he went in again and stayed in eating . How amazing .He obviously took it all in, more so than we thought." LS (22.10.15)

He can be a handful when taken for a walk, escalating his behaviour pretty rapidly. Some very basic groundwork calmed things down a bit and  was at least a good start. As he is retired he can be left the way that he is but the owner now has a few options for changing things.

We finished today by looking at George. His owner has discovered that despite his general nervousness he is really good to lunge. However she is concerned that he switches off and just goes through the motions. We can be more positive than that since I could see that there was definitely a connection between them and that he was observing her body language. Lynn experimented with asking him to go in straight lines, and turning his hindquarters away from her and his head towards. Whilst he could do the former, he found the latter difficult, and I expect he has been told off for trying to come in when he is being lunged in the past. 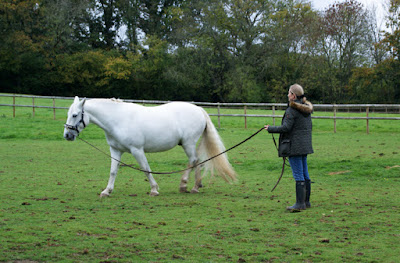 Single line work can be a really good way of starting a discussion with a horse and as an introduction to long reining. Here I am taking a more angled position so that I am driving him forwards but you'll note that I have a very soft expression so that I don't put too much pressure on him. 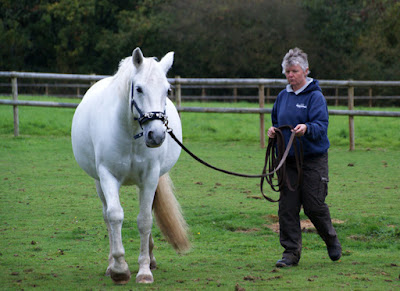 At the very end we introduced clicker training in the hope of encouraging him to get braver about things like the long reins touching his body. Lynn's husband runs a trout fishery so we explained it to him in angling terms. The way to keep anglers happy with their fishing is not to provide so many fish that they are bound to catch one with every cast of their line. It is the random nature of catching a fish, coupled with an element of skill, that keeps them coming back. At the same time you don't want them to catch so few that it is not worthwhile or they lose the reason for doing it. Making sure that they occasionally catch a Brown Trout amongst the more common Rainbow means they occasionally get a bonus which can reward the work of a dedicated angler or invigorate a disheartened one. (Sorry to all vegetarians). 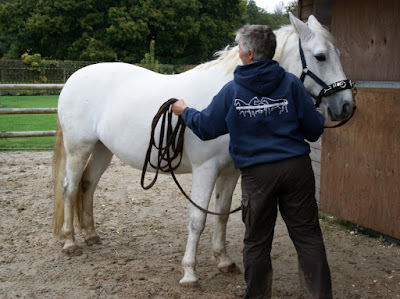