A two day trip to a beautiful village near Milton Keynes where the owners offered to put us up overnight in our own wing of their old rectory. Carla and Gary have taken in three Dartmoor Hill Ponies that were due to be culled as part of a plan to reduce breeding numbers on the moor. The 14 year old mare with a yearling filly at foot arrived pregnant and later gave birth to a colt. All three are the real Dartmoor Pony type rather than the more obvious cross breeds with coloured pony or Appaloosa in their blood. Accordingly they are very pretty and pretty sharp but each has had a very different experience of life. 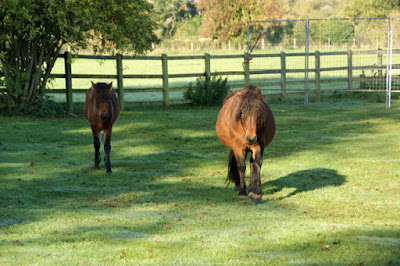 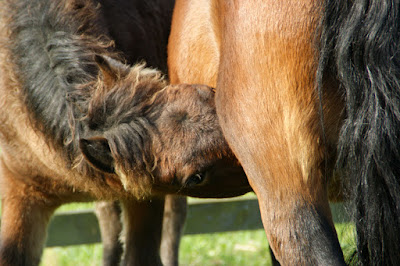 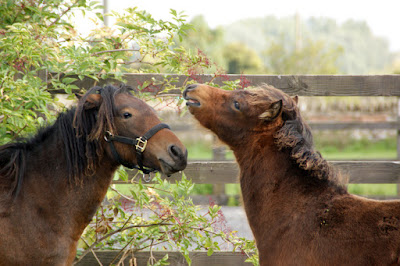 Mumma, as Ivy is known, has lived out all her life and come in once a year in a round up where any colt foals will have been abruptly taken from her at about 4 months. Apart from having a metal ear tag shot into her sensitive ear when she was a foal herself she does not appear to have been branded for identification. However, she will have experienced the chaos and manhandling that comes during a round up. 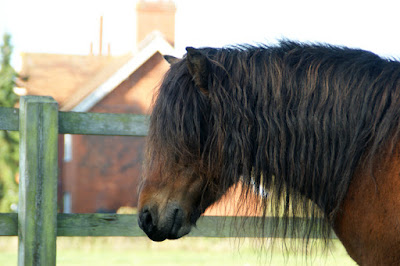 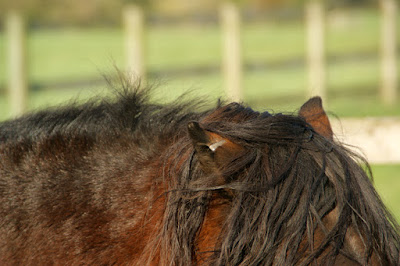 Fern, the filly, will have been rounded up with her mother at the final round up. As she was due to come off the moor she was not branded or ear tagged and will probably not have expereinced the close up manhandling, restraint, and pain, that this would have entailed. She was then turned out into a field with her mother until she was herded again to be transported North to her new home. 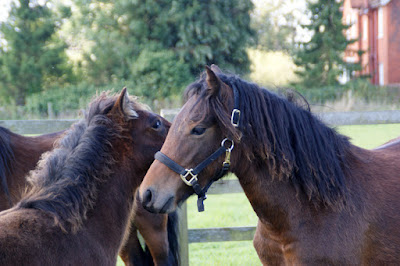 Scruff, the four month old colt arrived in the serenity of his new home and has experienced none of the negative experiences that the others have. 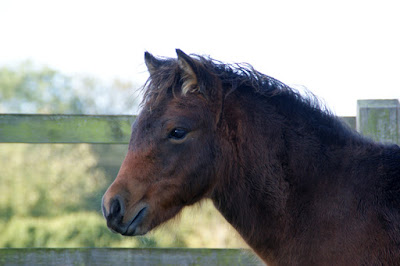 So they all share the same genes but their lives have been very different and each one reflects their experience of humans through their readiness to accept close contact with humans again. Mumma, stands back and accepts food in a bucket but won't be touched. Fern has worn a headcollar and will lead but the catching is tentative so the headcollar stays on, and she doesn't want her body touched at all. The colt is into everything, loves people and is experimenting with his own power.

The first priority was to ask Fern to accept touch all over her body so that putting her headcollar on and off wouldn't be such a tentative affair. The trusty feather duster was followed by a hand first on her offered left side and later on her right when she decided it was safe to let us in. 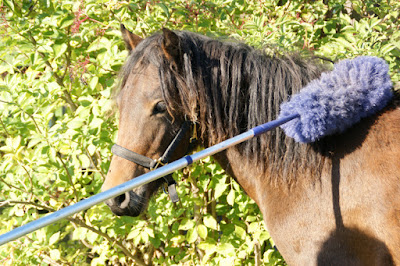 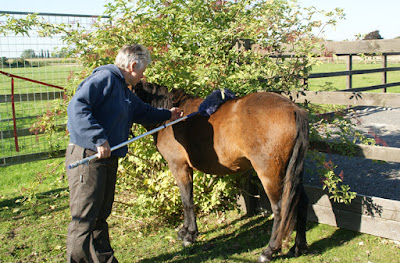 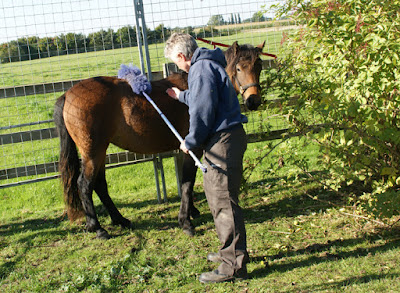 On our second day we moved on to leg handling... 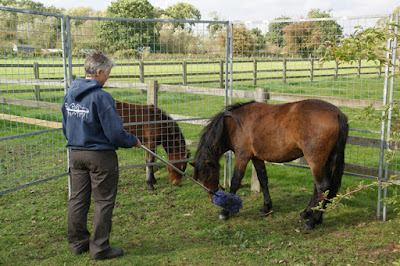 ...and then finally back to her head. Despite already having a headcollar on, and perhaps because of it, Fern was still ambivalent about having her head touched and was particularly ear shy on the left. So a little bit of unpicking was required. The soft scarf helps to persuade horses that having their head touched can be a pleasant experience. 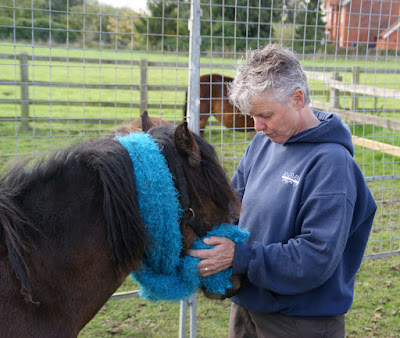 I then practiced putting a headcollar on and then off on top of the original once and spent some time gently working with her ears to undo her ear shyness on the left hand side. Having asked her to move her ear back to touch my hand a few times, I am gently "unscrewing" and then "screwing back on " her ear again. This gentle rotational movement is very relaxing for a horse and you can see that she is falling asleep while I do it. 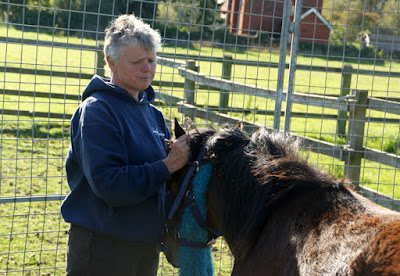 After this it is time for her to go naked... 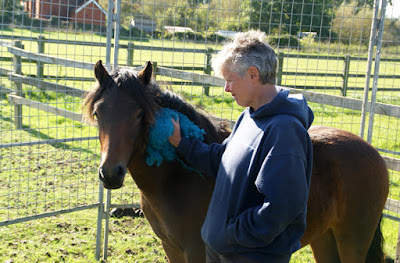 She was happy to be held by the scarf alone, a sign that she had understood and accepted the leading training that Carla had done. 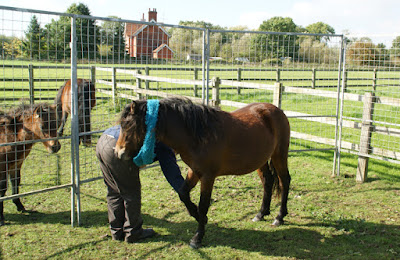 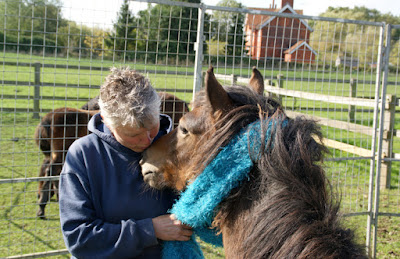 Mumma was an even more delicate piece of work as she was very frightened and likely to run through me if she decided to. I started with her nose, engaging her curiosity, and very very slowly moved on to her neck, back, and then bottom on her offered right hand side. The elderflower bush in the corner of the pen served as a refuge and busily touched the ponies with its leaves as I touched them with the duster. I found it helps! On our second day, Mumma surprised us all by offering her left hand side as if she wanted to be evened up. 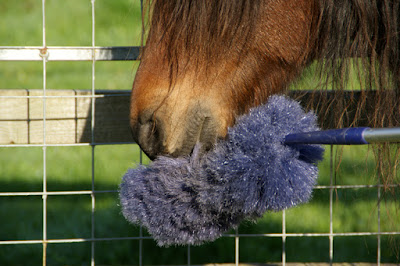 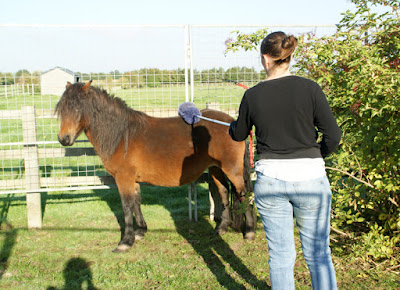 And later I was able to work with her in the more open part of the pen taking care not to put so much pressure on that she was tempted to go over the rails. 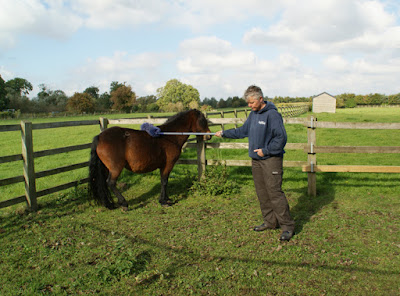 We finished the last session with touching her legs and you can see we have quite a way to go to get her to accept having her trimmed! However, the friendlier she gets and the more used to some handling, the better the chances even if it is to use intra-muscular and then intra-venous sedation or oral sedation. 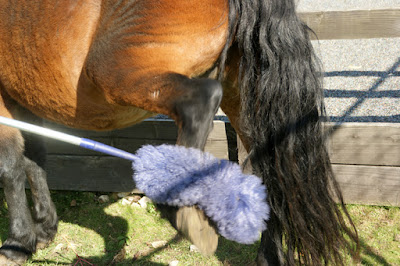 Scruff was quite tricky to engage just because he was so busy all the time and constantly into stealing the scarves and headcollars. He accepted touch with the feather duster and hands and we were able to move along to his more ambivalent hindquarters. 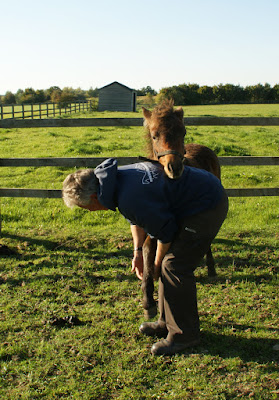 Front legs are no problem although he will do a colt lean if he gets the chance. 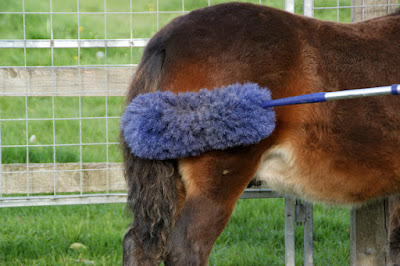 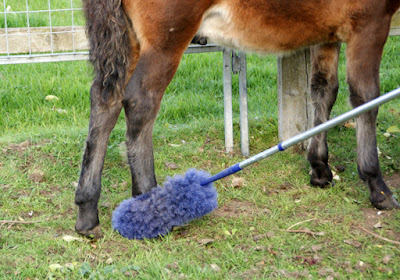 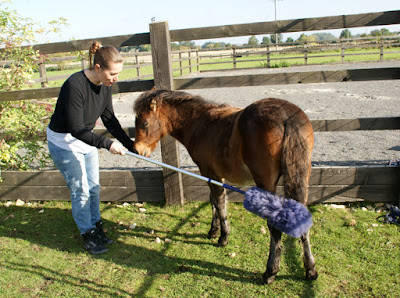 More scarf works around his head... 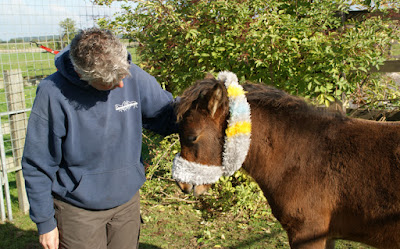 ...and Carla teaching him to lead just using the scarf. 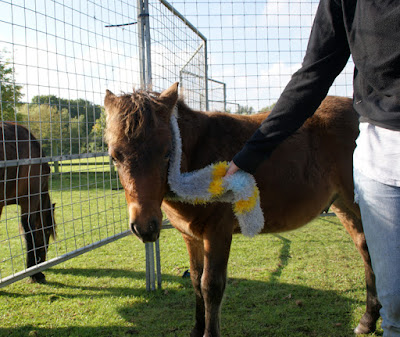 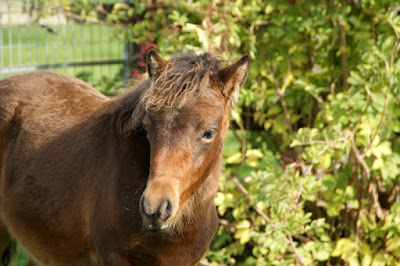 The ponies aren't the only animals. Tracey shares a moment with Katy, the Labrador. 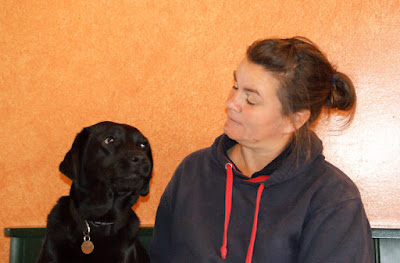 Photos by me and by Tracey Parnell.

"Thank you both so much too.  It was emotionally exhausting - who knew.  My feather duster has arrived and we just need to make a pen now and then I am getting down to practice. Although Fern and Scruff have been happy to be handled in the field. They are all very cute in the bigger field together.  Just need to summon up the energy now! This week we are learning to feed in the yard!" CB

Posted by Loisaba Wildlife Conservancy at 10:32 AM