All around the United Kingdon and beyond there are people quietly engaged in bringing ponies back from the brink after some trauma or robust handling. One of the most notable that I have met was Rumble, a Dartmoor Hill Pony, who is an interesting three year old cross between a Dartmoor type and an Appaloosa. When I saw him eighteen months ago I could only make a tiny inroad into the work that needed to be done to bring him around but I felt at the time that if anyone could do it, his owner, Kerrie, could. She has patiently worked with him ever since and now he can be caught, led and have his feet handled. He even goes for walks. I am so impressed with what she has achieved, yet even so she had had to tailor her ambitions to the needs of this pony and what is realistic. 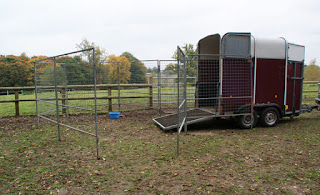 Today I was asked to go and work on loading him. Please note that this trailer was simply being used for practice and until he can be accustomed to bars and partitions, Kerrie will need to hire a suitable horsebox or stock trailer so that he can be travelled loose. It is not safe to travel horses loose in a standard horse trailer since it affects the nose weight and the stability of the vehicle and could render you insurance void. For the purposes of this session the trailer is attached to a vehicle for balance, has been stripped of all the bars and partitions, and is parked on a soft surface. 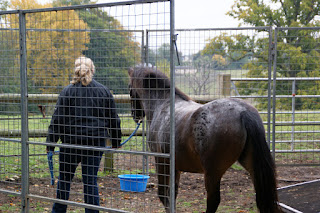 Rumble is first asked to enter the panelled area so that he can learn to relax in a contained area which is different from his stable. He has a small feed in here. 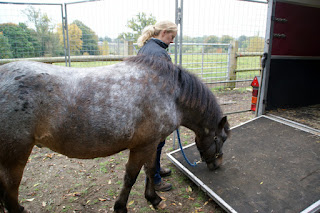 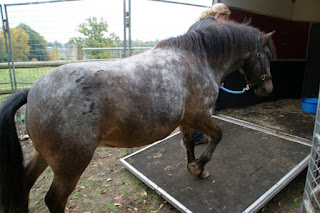 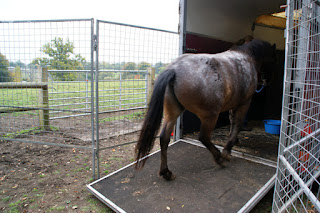 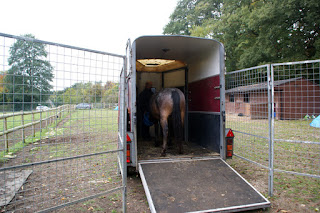 Then he is quietly asked to load and between each of these four stages he is backed out three paces. This enables him to reduce his adrenalin and is a form of pressure and release. 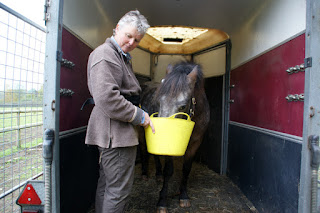 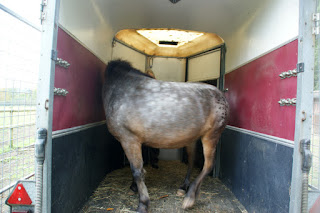 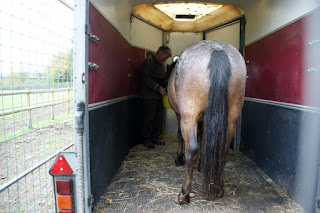 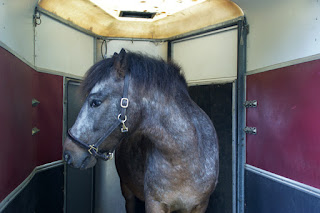 I want him to be calm and quiet in the trailer and comfortable with touching the sides and facing, for now, in either direction. He needs to realise that he can balance himself too. If he is travelled loose he should then be able to find the most comfortable position in which to travel and when he is eventually tied up he won't be afraid of touching the sides of the box or the partition and will be less likely to scramble. 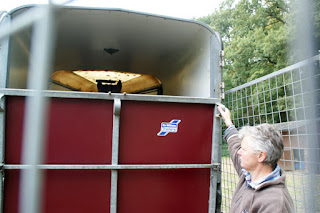 Once he was relaxed enough, I closed the back ramp. Please note that it is not safe to close the back ramp behind a pony without a full or partial width bar behind him in normal circumstances. Here I have arranged the panels so that they are very close to the back of the trailer and got him used to being 'held' in by those and he has got a feed to keep him happy and occupied. I am standing at the side of the ramp so that I can let go if he were to surge forwards or backwards - nevertheless I would always exercise extreme caution before doing this. 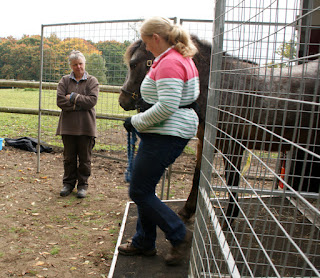 Unloading after a successful session and then straight back out to the field.