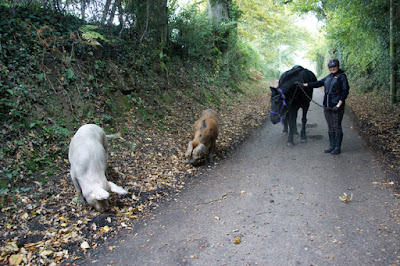 This morning I went out as Kathryn's minder while she walked and then rode BB. My job is to remain switched off enough to keep her and BB relaxed and switched on enough to anticipate any problems. Fortunately everything was uneventful even when we met various farm animals including a cow which was bellowing its head off trying to find its calf (it did). 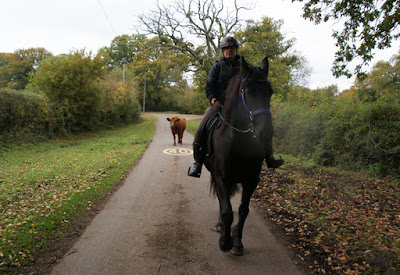 Sadly the afternoon was not so uneventful. Having spotted Blue who I haven't seen on the Forest for a couple of weeks, I thought I'd better give her the once over to make sure she was alright. She appeared to be fine. However, that little bit of horsey subconscious that all experienced horsey people have noted that the nearby grey pony under the trees had rolled more than once. Sometimes when a pony is unable to satisfy its need to roll on both sides, they will get down a second time to make sure they get a second coating of dust or mud. However, it always registers that this could be a sign of colic and so it was... 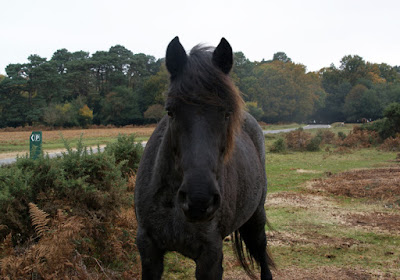 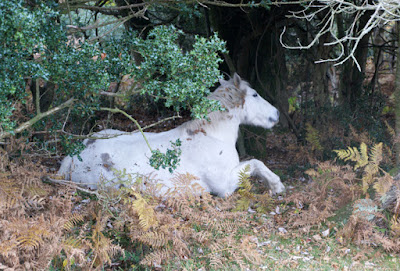 ...when he came out of the trees he lay prone for a while and then rolled some more and I telephoned the Verderers and then his owner for help. Being a quiet pony, and in trouble, he allowed me to put a headcollar and lead rein on really easily and so I settled down to wait for help to arrive. The behaviour of the other ponies was reverential, as they came forward to touch him softly. 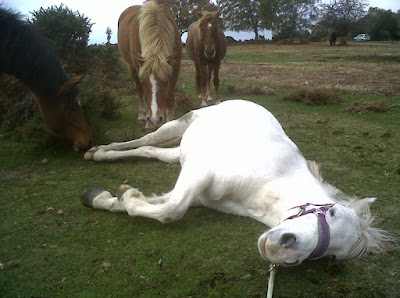 The behaviour of the humans was less pretty as once again people slowed down to gawp at a recumbent pony when they wouldn't think about slowing down for an upright one. At one stage there were three cars parked facing me in the car park opposite, all of the occupants watching the show as if it was a drive-in movie. One chap even came over to take a close up picture until I told him that he would distress the pony. I was then treated to a tirade when I asked him not to touch the other ponies either.

Having got him on a lorry to go home, the news this evening is that he has been given a good dose of Buscopan by the vet and so far appears to be fine. Let's hope there is a happy end to this story.
Posted by Loisaba Wildlife Conservancy at 6:32 PM