Vikki and her crew of two yesterday were especially interested in the No Fear, No Force method of training semi-feral ponies because they sometimes work with Pottok ponies, a breed of semi-feral pony from the Basque region of France and Spain whose name comes from the Basque for little horse. Declared a separate breed in the 1970's the Spanish insist on them being black and cull those that aren't,  whereas in France they can also be bay or coloured. This has echoes of the situation on Exmoor where Exmoor Ponies are rejected if they have any white on their bodies or even white pigmentation on their feet even though research shows that originally Exmoors came in a range of colours. 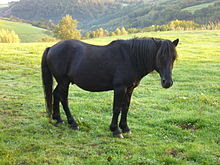 Posted by Loisaba Wildlife Conservancy at 10:22 AM