11th February, 2016 Scrabbling for an Answer 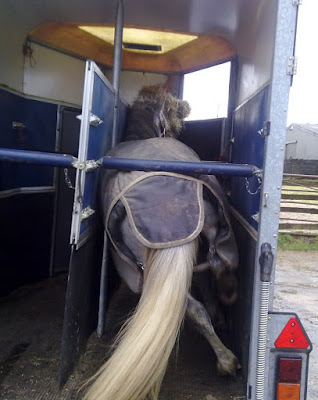 One of the questions I have been asked during the last few days:

Hi - I think I may need your help! My mare is 16; always travelled amazingly well. Happy to load into a trailer or a lorry and has stood like a rock. She was used weekly at our local RDA so was used to going places on a regular basis. Back in October myself and a friend loaded up to go Xc schooling. On the way there we heard banging and clattering in the back. We stopped and all appeared ok, so carried on. More banging, stopped again, and still nothing obvious. By the time we got to our destination my mare was dripping in sweat and cuts down her legs. We assumed colic or similar so I just walked her around for an hour or so to keep an eye on her before loading up to come home. The same happened on the way home, but this time we stopped and she had semi gone down in the trailer. We stood and watched and it was almost like she was passing out. There was absolutely no panic, or stress shown. She just couldn't stand up. We got her off asap and called the vet. He came out. No temp, heart rate normal, and no obvious reason for it. He sedated her, so we loaded up and tried again. Within moments of being shut in, she collapsed again (each time being propped up by the central partition). Luckily the vet was still there and witnessed it all. He did all sorts of tests as he was worried it was neurological problems. All fine. He took bloods and left us, as nothing more we could do. I called a friend who had a lorry and she came to collect M. Who then travelled home quietly on a 7.5t herringbone lorry. Bloods came back showing she had a virus. A course of antibiotics and she was better. So a few weeks later, I tried the trailer again. She walked straight in, happily stood, I shut her in, and still happy. However, within 2/3metres of moving she yet again couldn't stand up. She isn't in the slightest bit stressed (or at least showing it anyway). Having seen her go down, and being so terrified that she was A) going to hurt herself, b) hurt the horse that she was travelling next too, and c) it just wasn't very nice at all, I'm now a nervous wreck about trying again. Lots of people have said to try without the partition, but I am too scared and worried she is going to hurt herself.

I was just wondering if you had come across this problem at all? Whether it's something that can be worked on, or if it's now something that she just won't ever be happy doing. I cannot afford a lorry, so that isn't an option for me." HE


Having met this situation about twice a year, and having no magic wand solution, this is what I wrote back...

This is a problem that I have come across perhaps once or twice a year and the only common factor seems to be that the horse or pony involved is in their teens or early twenties. Quite often there is no obvious trigger for the start of the behaviour; nothing significant seems to have happened at least from a human perspective. Like you, I have wondered if there is a physical explanation and I have considered back pain or hock pain as a potential culprit. Unfortunately, as you know, it is expensive to give your horse a full check over when there is nothing obvious to point at. You could consider asking your vet to authorise an expert in thermography to see whether there are any obvious hotspots in your pony’s joints or back or get him checked by a Chartered Veterinary Physiotherapist.
In my experience, the fact that your pony has continued to load well, is not an indication of how he feels about travelling at all; this too has been a common feature of the horses I have met with the same problem. By the time the horse gets into the situation [like the one shown in the photograph above] the behaviour is pretty extreme and it can be very hard, if not impossible to solve it.

It helps to understand what is actually happening. Having observed the behaviour closely, the horse seems to go into a trance like state with sleepy eyes and nodding head, then the hindquarters collapse into the partition and the horse scrabbles, almost gallops, with its front legs and often leaves hoof marks on the opposite wall. You may have heard that horses are ‘into-pressure’ creatures meaning that when they can’t flee from a predator, they fall or push into it instead. This appears to be what happens in this situation and I imagine the horse must be feeling very vulnerable in order to do this. I wonder whether at some stage these horses have either felt that the partition cannot be trusted or that they may have not have been able to balance around a corner and that’s where it starts. Without CCTV footage at the very beginning of this sort of behaviour it is difficult to know.

Before you try travelling him again it would be worth doing some basic groundwork with your pony so that she learns to move away from the pressure of something touching her sides. Then, with two of you, you can work on asking her to step away from a plastic jumping pole held at mid body height. You should just be aware however that when a horse’s adrenalin levels suddenly increase, they have a tendency to go back to their into-pressure instinct.

One of the standard answers to this situation has been to remove the central partition in the trailer and to travel the horse WITH full width front and back bars, cross-tied at the front. However, as someone who frequently works with the Fire and Rescue Service Animal Rescue Team, I know that their officers have grave reservations about this mode of travel even though the manufacturers of trailers seem to cater for it by providing full width bars. The problem is that in an emergency, the load is far more insecure when the horse has more room to move because a horse’s centre of gravity is relatively high. We all want what is best for our horses, but the law creates a duty to other members of the public and I think this method of carrying horses could be considered unsafe. It needs to be clarified in law.

Some people have had success by travelling the horse on the opposite side of the trailer but it is rarely the answer.

Under no circumstances should you consider travelling with the horse as it is both illegal and extremely dangerous. It would certainly negate your insurance.

I am off to the IHRA Meeting next Tuesday and hoping that someone has a more positive answer. Whilst I am always happy to help people to resolve situations like this with their horse, I am always careful to be honest about the chances of success.
Posted by Loisaba Wildlife Conservancy at 10:06 AM