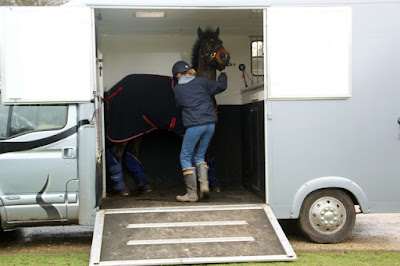 Eight year old Irish Sports Horse, Jazz, came to Fritham yesterday to practice his loading. As you can see he is intent on forcing his way out of the box and through his handler. We needed to interrupt this pattern where his primary thought was to leave. His owners were very frank and admitted that they had been practising taking him in and out but felt that instead of making him more relaxed, it had actually taught him to go in and come straight back out again. 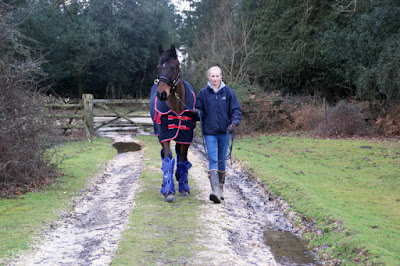 It was evident that pushing and pulling his way out of things was Jazz's usual modus operandi. Accordingly we took him for a walk in the inclosure, not only to make the reloading after a break more realistic, but to establish a few ground rules when leading. 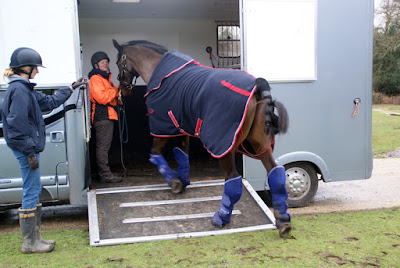 Jazz can sometimes be persuaded to stay in by a bucket off food when he is loaded but then the owners have to be very quick to close the partition. 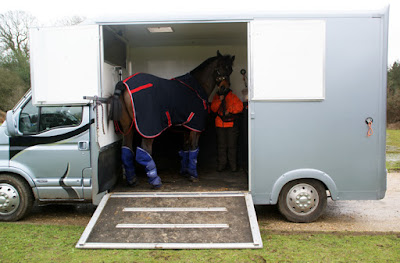 I used clickered treats to encourage him to think about staying in the box and to interrupt his pattern of loading and leaving.  The owners left with recommendations to do a lot more groundwork in order to gain control of him on the ground and to let him know that he could rely on them when he is worried. There is only one letter difference between leading and loading and the two are closely connected. However, I would still like to get to the bottom of why so many horses don't seem to like these type of boxes. Once in he had plenty of room but a high breast bar in front of him might be factor.

Meanwhile Henrietta is choosing her field mates each day based on what they are being fed.
Posted by Loisaba Wildlife Conservancy at 3:48 PM