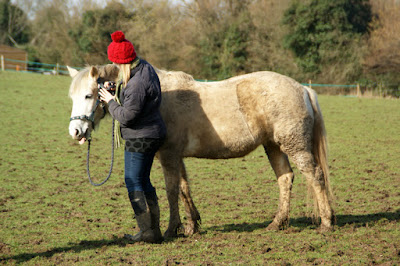 A trip out to Stockbridge this morning to see our first pony. Like a lot of New Forest ponies, which are also available in white, she's tenacious, courageous and eating is her favourite hobby. Lesley has been having trouble catching her and sometimes she pulls away to get to grass. She's actually a very nice little mare, and a pleasure to ride, and only doing what she feels she needs to do in order to get to or avoid being taken away from food. We worked on two alternative methods for improving catching - the first using body language to 'walk her down' rather than sending her way, and noticing her very first offer to be caught. The second, and much to her approval, clickered treats. The only problem we had with the latter is that when we were practising she spent a long time savouring even just one nut before giving us her attention again. 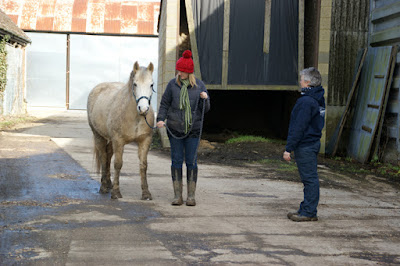 We also did some leading work - setting up a 'smile in the line' and a 'motorbike hand' so that there was comfort but strength when needed. 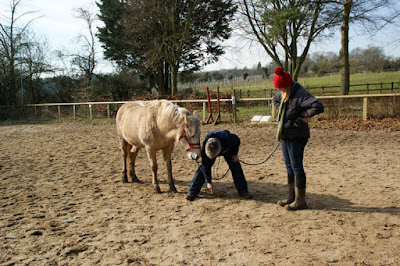 In the school Sally paid careful attention to the drawing on 'the board' but she could have been asking me whether it was true that actually Sally is my real name. (It is.) 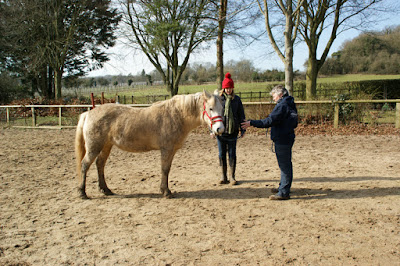 We used the Dually in this instance so that Lesley could give it a try and note that it works just like a normal headcollar unless and until a horse is really determined to pull away and then it can give you better control. In fact Sally was very amenable and attentive.
Posted by Loisaba Wildlife Conservancy at 6:00 PM