Nothing to learn from my session with Henrietta and Jack this morning, just pure fun. They are both eager to go out, heading for the gate just as soon as they realised that we might be going. With the emergency bucket hidden behind the heather bales, we set off for a lovely stroll. Henrietta is like a cat in terms of agility and a dog in terms of her enthusiasm for exploring, although Jack is keener on 'heel work' like a blonde Labrador. 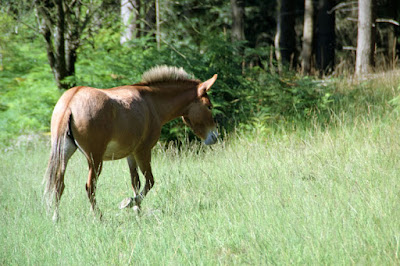 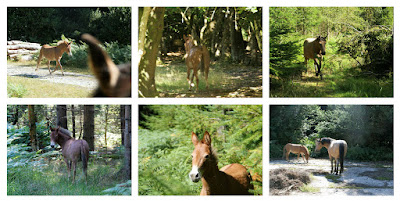 This afternoon's session was a tough one, especially in the face of the kindest of owners. It was a perfect example of the need, sometimes, to combine a yes with a no in order to explain to a horse what you are asking for. Irish Cob, Socks, is an easy going horse generally and a pleasure to ride but something in his history has caused him to develop a very strong and almost instinctive strategy to avoid being mounted. His owners have made sure that his back and saddle are comfortable, but the dye was set some time before when he didn't have a well fitting saddle. His rider is light and agile. 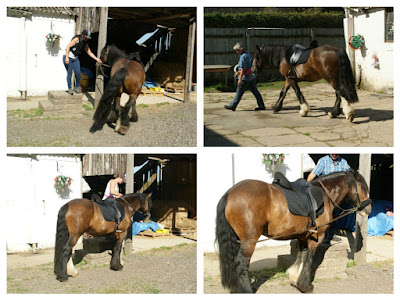 Clicker alone was all that was needed to ask him to halt and stay still around and about the yard but the moment he went near the mounting block he began to go through a series of moves designed to avoid or postpone being mounted. He would resist going forward, and turn his hindquarters to the left so that he was standing over the mounting block or turn his hindquarters away as far as he possibly could. He was so quick and automatic with this behaviour that there was little opportunity if any to interrupt it. Placing more pressure on the right rein than the left can sometimes be enough to discourage a horse from turning his hindquarters but it didn't work today especially when any weight was put into the left stirrup which seemed to be a set trigger for him moving away. Accordingly I switched from his bridle and used a lunge rein from the right ring of his Dually, through his right stirrup, around his hindquarters to the left stirrup and then my hand so that I could correct him every time he took his hindquarters away. We ended the session with him standing still when weight was placed in his stirrup six times whereupon he received three clicks and a generous treat.
Posted by Loisaba Wildlife Conservancy at 8:02 PM