First off was new client, Gigi, and her smart Welsh Cob (mostly) Oscar. Oscar is 15 and was known to have a problem with loading when she bought him in January. Indeed, Gigi knew him in his previous home. This capable and quiet young woman, with a lovely attitude to her pony, is looking forward to being able to compete with him but knows that she needs to get him over his reluctance to load rather than spend 2 to 3 hours loading him to come home from an event. We tidied her groundwork up a bit to begin with so that he wasn't pulling or pushing her around, and realised that he could rely on her to be there for him.


After that we worked on the loading until he was walking in and staying in really happily. This seemed to be the very best note on which to end today's session. Once again it was mainly changes in technique, facing him but looking at his feet not his face, gentle pressure and release and a three click system for rewarding any willingness to come in. He went from rearing and disappearing around the side of the trailer, to standing quietly in the trailer. 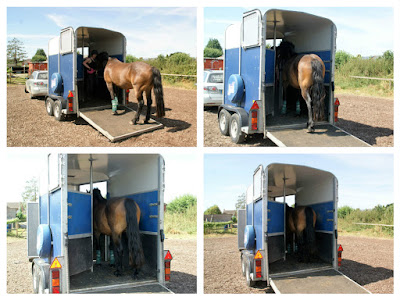 You'll see that I have attached my car to the trailer in order to keep it balanced; the last thing we want is for the trailer to tip or see-saw with a pony on board.

Danebury Fort was particularly hot and sunny at lunchtime today so it was a relief for me to find the Exmoor ponies sheltering under the trees at the bottom of the long hill. It was such a pleasure to see that peanut (Nightingale), the pony we moved there just a few weeks ago, so settled and clearly friends with another pony. 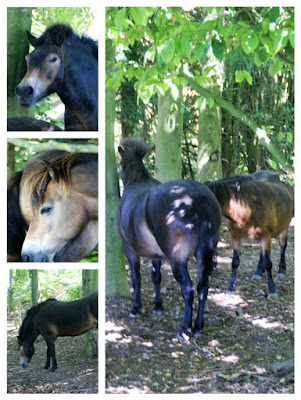 He looks a little sweet-itchy but I have known ponies to improve when allowed out on natural grazing with less stress in their lives.

Next stop Brio who has been going up and down the ramp (backing out) all week without the panels in place. Even better, Kate's genius father, Rob, has finished the changes to the box which include a new surface for the ramp. 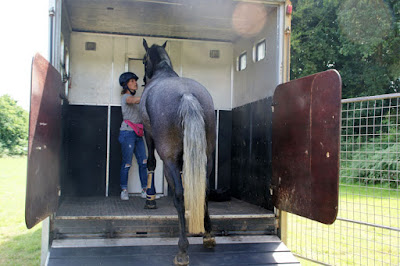 We put the panels back in place so that we could limit any leaping from the ramp once he was asked to turn around in the box. Brio finds it psychologically difficult to turn in the box and then to come out forwards. Accordingly he tends to park himself in the very centre of the ramp with one or two back feet anchoring him to the ramp itself. 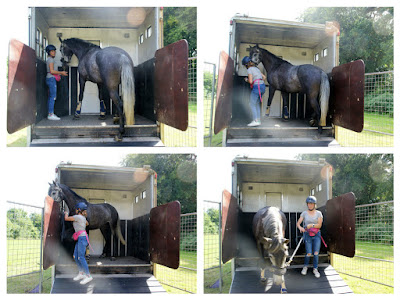 It's not easy to help him to turn with ordinary steering as he tends to move his front feet without moving the backs and although he can turn very easily when he is outside the box, any attempt to push or touch his hindquarters to ask them to move over leads to an into-pressure response instead, i.e. he moves towards the hand. The best way to turn him, but one requiring at least two pairs of hands, is to ask him to follow a bucket. He exited the box forwards six times today, and on the lead rein. 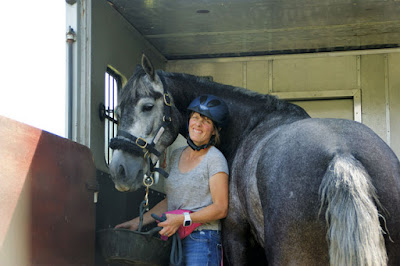