Having not seen beautiful BB for a fair few months it was good to hear from Kathryn that she has come such a long way with her ridden work out on the Forest and during lessons. BB seems very content in her new yard at Arniss where she has plenty of turnout, lots of space and the company of a big herd.

Today I had been called out for three specific problems: BB's refusal to be touched around her teats; to accept fly cream in her ears; and cream on her face. 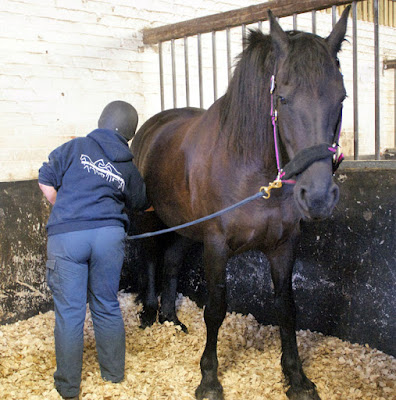 A mare's teats can be ultra-sensitive particularly in a maiden mare that has not fed a foal. Witness the problems encountered by breeders with first time mothers unable to tolerate their foal drinking from them, squealing or kicking out when the foal approaches the bag. Some of this is the tension of milk production, and some is the intensity of feeling in the teats themselves. 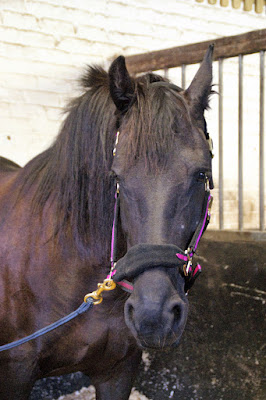 My first job was to create a predictable pattern, not going directly to her teats but putting a flat hand against the inside of her back leg and then the back of my hand against her teats. I waited at this stage until she stopped kicking out at me or moving away and then took my hand away. Finally I sought a way of touching her teats that she would find pleasant - imitating a foal, I gently squeezed her teats and then moved my fingers downwards a little. This had the effect of sending her into a blissful trance. Once this was established she allowed me to approach many times and seemed to welcome it. I could handle her teats clean around them. 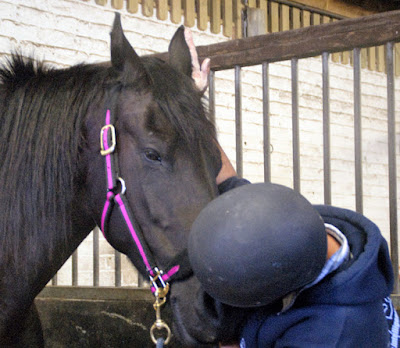 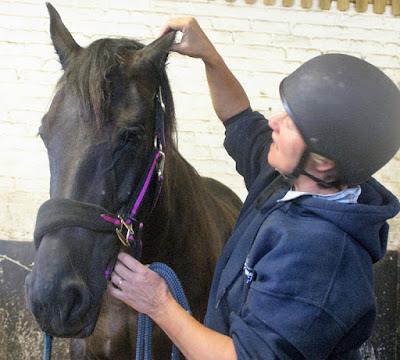 For her ears I used my often repeated technique of holding a flat hand covered in cream (at hand temperature) next to her ear and waited for her to press the rim of her ear against my hand. There is no need to push cream into the ear as it will find its own way in time. She did in fact let me rub the inside of her ears to about 3 inches down but I take great care to rub only outwards so that any debris is ejected outwards. 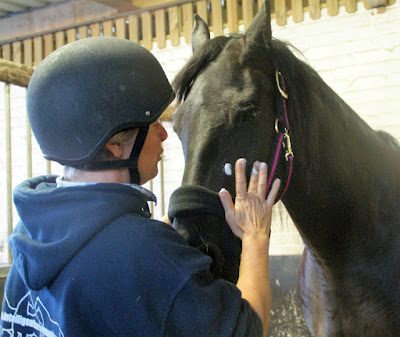 By the end of this putting cream on her face was pretty easy. I just needed to give her a little rub, put the cream on, and then give her another little rub. Rubbing helps to take the sensation away. 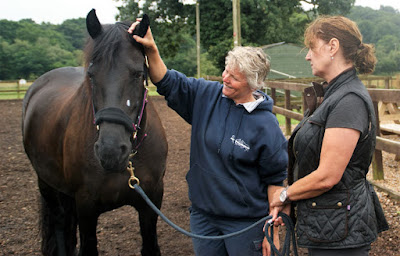 Rotating the ear is a great way of making friends with them.

Not such a successful afternoon but it wasn't for want of trying. Push had come to shove with Henry exhibiting all the signs of a foot abscess necessitating a visit from the vet. I gave her some Sedalin before Beth arrived and Beth very cleverly gave her a good dose of intra-muscular sedative when she arrived, far from an easy job. Neither really made a difference to Henrietta's demeanour so that an intra-venous injection of sedative was out of the question. Without sedation it would be impossible for anyone to test her feet or release the abscess.  We have agreed that we will have to wait for the abscess to resolve itself and to give Henrietta Danilon to take the pain away in the meantime. 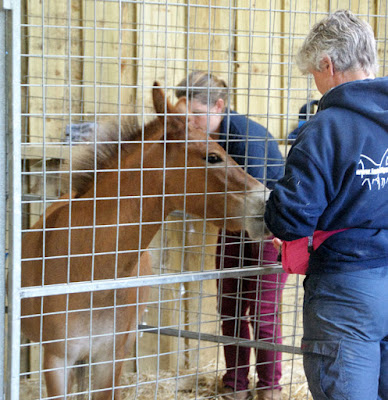