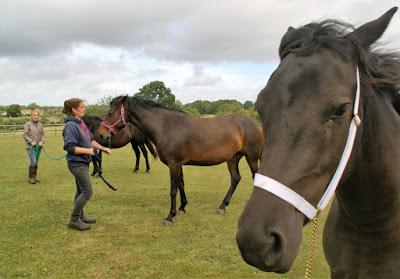 With ridden sessions cancelled for the second day on the run, it was good to be able to do some solid groundwork with Zoe, Zelda, Bella and Ivy. With three of us on hand, it was easy to go in hand. 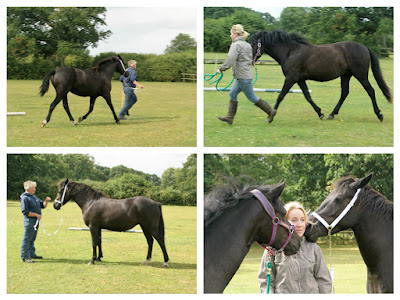 We worked on asking Zoe and Zelda to move around independently of each other and without being distracted by the other horse. We walked and trotted them around the perimeter, for varying distances, and also did individual shows, walking and trotting and standing up for the judge. At the end we also put rosettes on or near them to make sure that they were alright with that. It was an extremely windy day and they had plenty of neighing (and braying) to contend with from Jack, Ivy, Theoden and Henrietta who had been left behind in their fields.


Without meaning to be rude to Exmoor Ponies, it is always interesting to see whether they will remember anything they have learned the day before or whether it will have been washed away with the rain. It is also interesting to try and ascertain whether a pony's behaviour is due to nature or nurture. Ivy has never been manhandled, hasn't been branded, inspected, or forcibly haltered, and yet she is as nervous as some of the semi-feral Exmoor Ponies that I have met which have endured far more. There seems to be nothing, other than her own nature, to account for that. 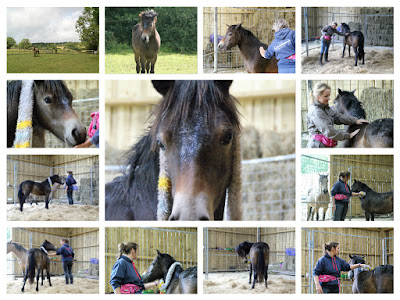 It's good news then that within five minutes of starting work with her today I had accomplished everything that I achieved yesterday and that she started off in the middle of the pen, unlike yesterday where she was at its edge. Moreover she accepted the attentions of two more strangers, Julie and then Tracey, and worked equally well with them. Once again we were seemingly working at a lower level than she has reached with her owner, not even putting the headcollar on, but I want to get to that part of her that is super-sensitive around her head and see whether we can make her more accepting of touch around her face. A soft scarf is excellent for this and can do a lot of the work for you. Ivy seemed to really like it, and we can move forward with this technique on another occasion.
Posted by Loisaba Wildlife Conservancy at 4:25 PM