Lubin and Michael have recently acquired Rosalie, a five year old gypsy cob pony and her six month old daughter, Luna. They have settled incredibly well and become friendlier by the day. Luna had her first foal slip on last week but by her own admission, Lubin said that it hadn't been the easiest experience. Accordingly we needed to take a few steps back as well as a few steps forward in her education just to make sure that having her headcollar on didn't become an issue. 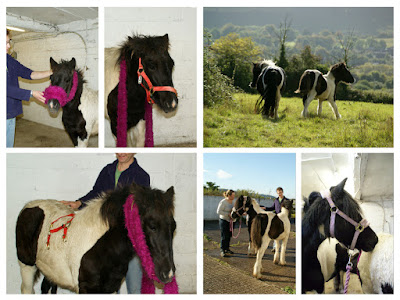 Michael is a musician and so it was easiest to describe the feeling that goes into the training in terms of the tempo of the music. 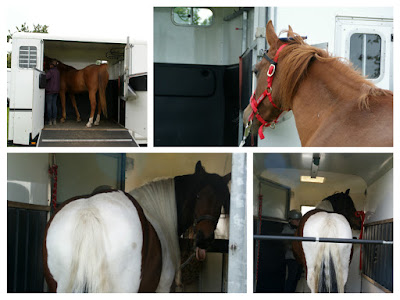 In the meantime loading practice for Archie has been taking a few steps backwards as well as forwards, leaving Richard feeling at times as if he was back to square one but fortunately going up to a square five again. Archie seems to sense any change in intent or attitude and certainly notices if the trailer has changed position or if there is any sharp noises from outside. Richard is going to experiment with playing soothing music in the trailer to see if it makes Archie better or worse. It reminds me of when one of the IH students did their project on Mozart to Megadeth and found that some of the horses seem to prefer the heavy metal music!

Bond is getting used to a new trailer Anne having switched to an Equitrek. As with most horse trailers and horseboxes I can point out some of the pitfalls with this from of transport not least of which is a front bar which is extremely difficult to remove in case of an emergency. It also has a very light sheet of plastic at the bottom of the partition which flaps in any wind while you are loading; today we fastened it up out of the way. Some horses struggle to work out where they are meant to go once they are in the trailer and that's what we worked on today.