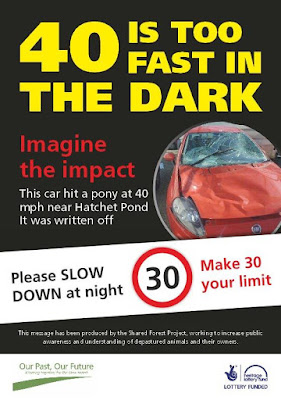 At the beginning of October, the tally had reached 82 animal casualties on the Forest as a result of road traffic collisions, many of them hit and run. As the nights have drawn in, there have been a further 10 including 6 deaths.  Earlier in the year I suggested that it was time there was a proper protest, drawing attention to the death toll and the anger that people feel about it. I had the support of over 350 people but was shouted down by two commoners who accused me of being misguided and undermining the efforts of the 'proper authorities.' The proper authorities, many of which are members of the Animal Accident Reduction Group are doing a great job in their own way, setting up police speed checks, changing signs and issuing posters like the one above. But they have to work diplomatically and slowly and by consensus and rely on the local press to pick up what is not a very interesting story, given that it is repeated over and over again. It may be in the Lymington Times but it is never in The Times or, more importantly, the press and social media that reaches every day people who cross the Forest.

My suggestion was a protest with one person wearing hi-viz standing in every place where an animal had been hit by a car for one day - preferably at dawn and at dusk. There needs to be a really great video done that goes viral on Facebook rather than limiting itself to the New Forest Roads Campaign page which doesn't reach commuters.

We constantly hear that most of the animals are hit by locals. I doubt that very much. Most are hit by people who live on the very periphery of the Forest and see the Forest as a bloody inconvenience to be negotiated on their way to and from work. I'm sick of it, we're all sick of it, but there seems to be very little we can do. We need to do something, preferably shocking, to change attitudes. 'Hitting people in their pockets' (by fining them for speeding) is not actually working. 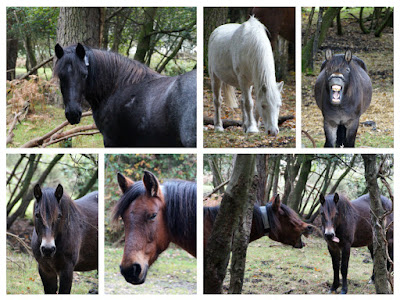 I found my little group today, and their friend Exmoor, and was able to replace their hi-viz collars which seem to have gone missing this summer.
Posted by Loisaba Wildlife Conservancy at 5:51 PM