With Théoden 99% sound due to the steroid injection in his coffin joint, which suffused into the surrounding area, I was torn about going ahead with his MRI. What with the travelling and the potential cost to either me or the insurance company (who wouldn't commit to paying for it), I wondered if it was worth it or necessary. Since ultimately I can afford it (this counts as one of those 'rainy days') and because I wanted to know if there was a definite cause for his lameness, I decided to go ahead. Moreover, Martin Peaty, the lameness specialist vet at The Barn described the MRI scan as the Gold Standard for diagnostics and so it has proved. 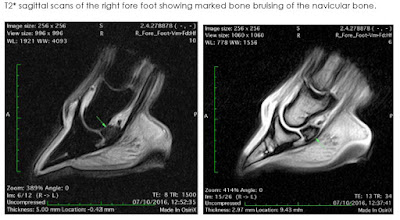 Put simply, the MRI scan showed that Théoden has 'bruising' to his navicular bone.

The next step for Théoden is to have "an infusion of a bisphosphonate such as Tildren®, and the efficacy of this treatment may be enhanced by the administration of one third of the dose by intravenous regional perfusion to the right fore distal limb." which will be followed by a period of six months' field rest. Only then will I make a decision as to how best to support him whilst being ridden.

I was particularly impressed that Donnington Grove vets had emailed this report to me even before I picked Théoden up yesterday evening and that Martin rang me at 6 p.n. on a Saturday to discuss it.
Posted by Loisaba Wildlife Conservancy at 6:23 AM